When given the right care, a polished Limestone floor can be an amazing asset to any house. If neglected, however, the tiles can quickly discolour from wear, especially in areas of high traffic, such as the kitchen.

Such was the case at this house in the small, picturesque town of Cowbridge, in South East Wales. My client had contacted Tile Doctor to see what could be done to improve the condition of the tile and grout which, as you can see from the photographs had not been properly maintained.

To get the floor back to its best it would need to be burnished which is a process that rejuvenating the appearance of polished stone through the application of different grades of diamond encrusted floor pads from coarse to very fine.

Before beginning the burnishing process, I made sure to check that there were no inherent moisture issues using a damp meter, the home owner had informed me beforehand that the floor did have a damp proof membrane installed however it is always a good precaution to check and additionally it provides a good baseline for later when checking the floor has dried after cleaning.

The Tile Doctor burnishing system consists of four main burnishing pads. I began by applying the coarse pad to the tiles lubricated with a little water, before rinsing the floor and moving on to medium and fine grit pads again lubricating with water and rinsing after each pad. After finishing with the third pad, I paused to rinse the entire area a thorough rinse extracting the resulting waste with a wet-vac machine. 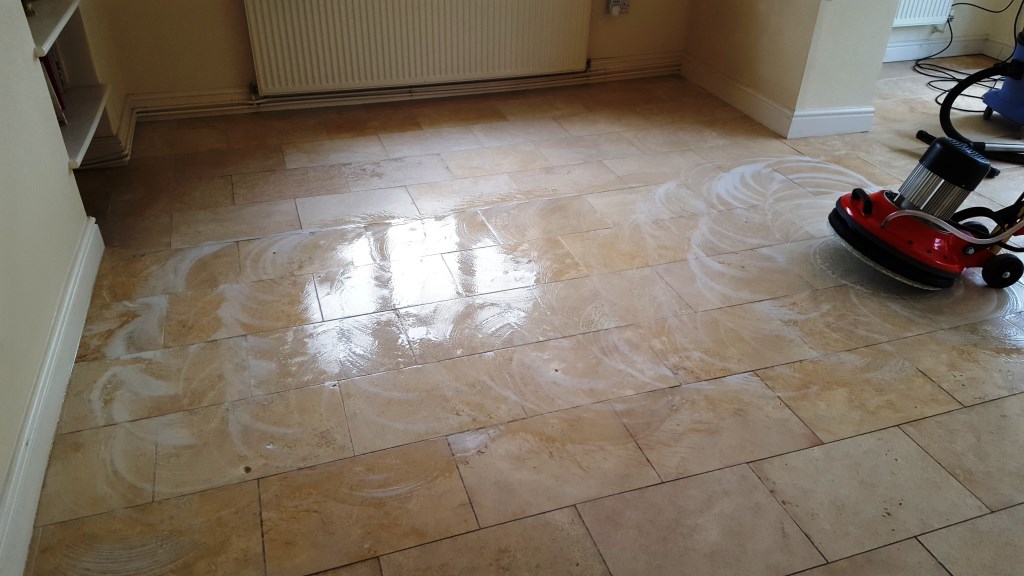 I then paid special attention to cleaning the grout lines, which had turned black in places. I applied undiluted Tile Doctor Pro Clean and agitated the grout lines with a stiff scrubbing brush to restore the original colour. This was followed by another thorough rinse. 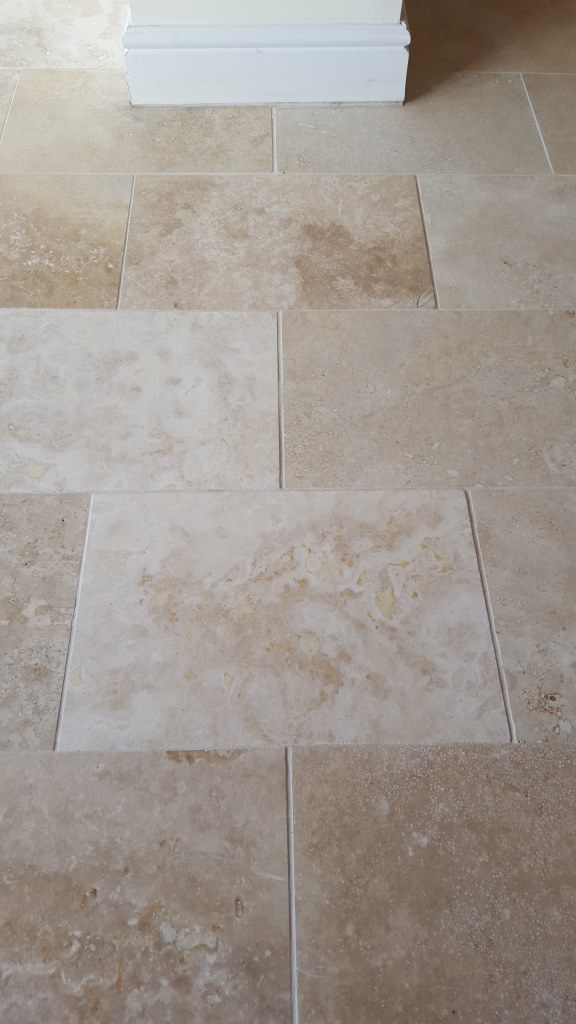 I left the floor to dry overnight, before completing the burnishing process by applying the final very fine grit pad which adds that aesthetically pleasing shine. I used the damp meter to check the floor had dried and once I was happy I began the sealing process with the application of three coats of Tile Doctor Colour Grow. Colour Grow is a great choice for Limestone as it penetrates into the pores of the stone protecting it from within whilst enhancing the natural colours in the Limestone. As a final step and to ensure there were no unappealing marks left on the floor, I went back over the floor once more with the fine grit burnishing pad. 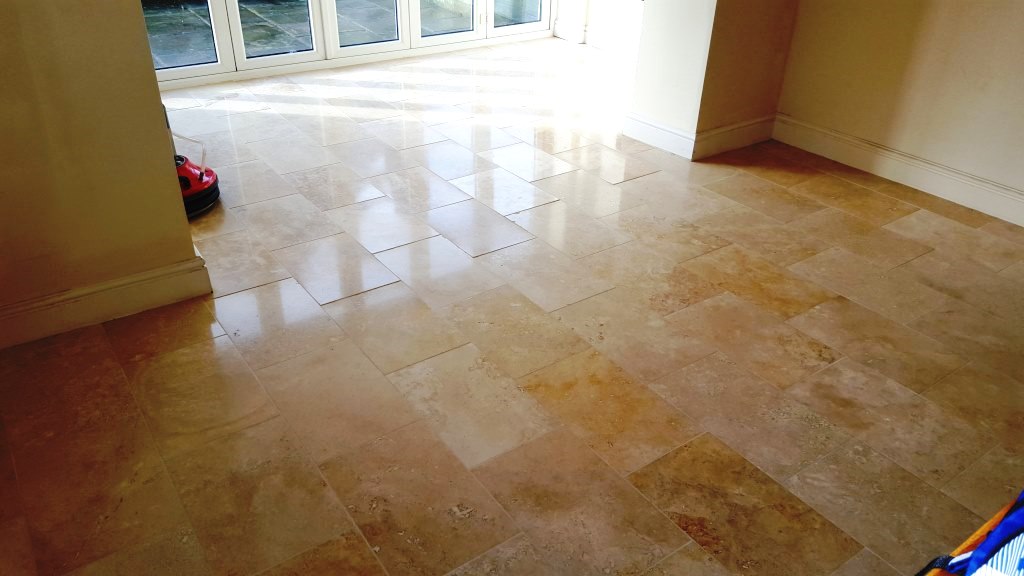 What was once a dull stone floor with dirty grout lines has now been restored back to its original condition and with the correct maintenance going forward should stay that way for some time.

The following post is follows on from the Limestone tiled kitchen floor restoration I recently completed in Cardiff. You may recall that the floor had not been maintained properly since it was first installed in 2008 and one of the key problems I had to deal with during that particular restoration was a number of dark stains left on the tiles by the kitchen dustbin. Here’s a detailed account of how I tacked the staining. 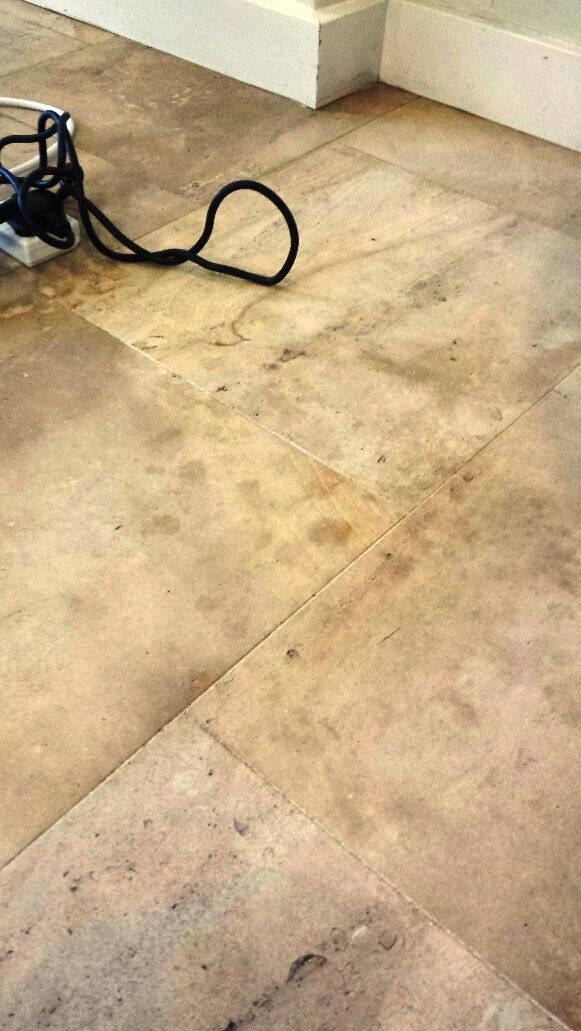 To deal with the stains, I suggested to the client that I experiment with a Tile Doctor product called Reduxa, which is formulated to remove certain stains, including red wine stains, from natural stone. It is suitable on Limestone, Marble and Travertine tiles, amongst others. Nonetheless, I did have to advise the client that unfortunately some stains are unavoidably permanent and that there was no guarantee that the product would be able to remove these particular stains. Had the sealer been maintained on this floor, then the problem would have been much easier to tackle. However, in this case the sealer had worn off over the years.

I began treating the problem area by applying the Reduxa solution, before heating up the tile with a heat gun to lift out the stains. This process of spraying and heating was repeated around eight times. 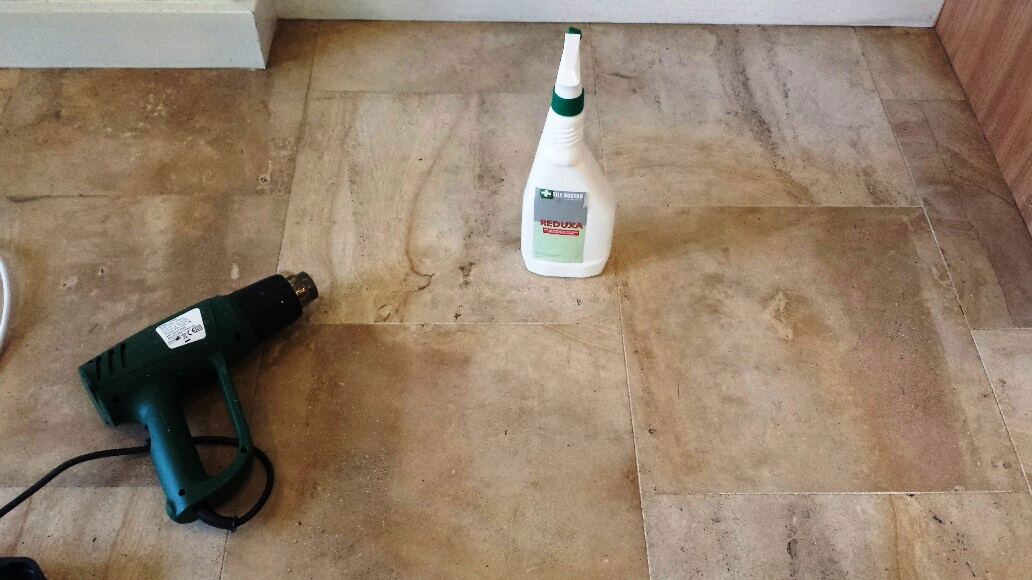 To cut a long story short, the process worked very well, and both myself and the client were amazed at the results the Reduxa stain removal solution had on the floor. This product really does what it says on the label! 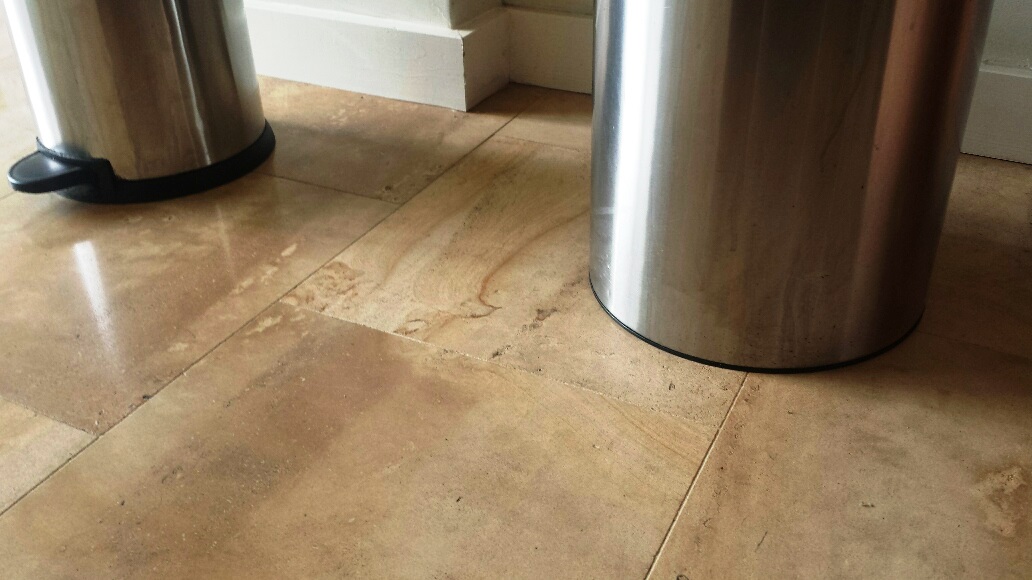 If you would like more information on the product, check out the video on the Reduxa page on the Tile Doctor website.

This customer from the historic city of Cardiff was keen to see what Tile Doctor could do to put some life back into their treasured Limestone kitchen floor that was laid in 2008. My first observations were mainly centred on the horrific condition of the surface which although adequately sealed initially the floor had not received any subsequent maintenance and its condition had deteriorated over time. The light shining in from the patio doors highlighted all the imperfections in the floor caused by surface wear and tear commonly seen in high traffic areas such as a kitchen.

Upon closer inspection, there were further problems: the floor was stained and scuffed, and in most places the sealer had worn off completely allowing the dirt to become ingrained into the pores of the Limestone. Additionally the grout was recessed but was now flush with the tile surface due to dirt build-up. There were also areas contaminated with grease and kitchen cooking oil.

The Limestone floor tiles were 20mm thick French Limestone, and had been laid very well so there was no requirement to do any tile or grout repairs however to get this floor back to its original condition the surface would need to be reconditioned using the Tile Doctor four stage burnishing system.

I started by giving the floor a wash with a medium dilution of Tile Doctor Pro-Clean, focusing mainly on the grout lines in order to remove the muck that had built-up there. I used a special stiff grout brush for this activity; it’s quite narrow and ideal for grout scrubbing.

This worked well, but the significant build-up of dirt along some of the grout lines meant more work was required. I tackled this problem with a hand scraper assisted with steam. At the end of this process, the whole floor was then rinsed down with water to remove any soil and the resulting slurry was then extracted using a wet vacuum.

The next step was to start the burnishing process, which basically involves applying four diamond encrusted floor pads in sequence over the floor. Each pad is a different grade, starting with the most abrasive coarse pad and moving through to the finer grades using a little water to lubricate and rinsing away any slurry between each pad.

I eventually finished with the extra fine pad which builds up shine and lustre on the tile; it had taken two days to clean the grout and burnish the Limestone but the floor was much improved and so after a final rinse down I left the floor to dry off overnight with the aid of the underfloor heating.

During this time, I also addressed the stained Limestone in the area of the kitchen where the dustbin was situated. This had been a major upset for the customer and I’m happy to report I managed to deal with it. However, it was quite an involved process, so I’ll write about this in a separate post.

On the third day I came back to seal the floor, checking first that it had dried sufficiently with a damp meter. Fortunately, the underfloor heating had done a great job of drying the stone and I was able to seal the floor using three coats of Tile Doctor Colour Grow sealant. This sealant not only provides a durable seal but also penetrates deep into the pores of the stone protecting it from within and enhancing the natural colours of the Limestone in the process.

After the final layer of sealant, I worked over the floor again with the extra fine burnishing pad both to add shine again following sealing, and to ensure that no smear marks were visible as the lighting conditions were unforgiving and highlighted any imperfections.

The customer was delighted with the results: so much so, in fact, that they booked me in to restore their Victorian hallway floor as well but that’s a story for another time!